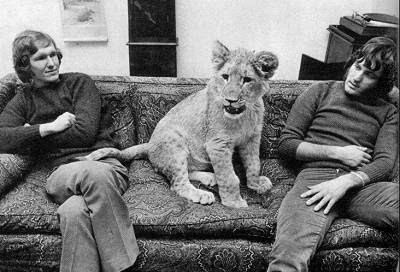 "How do I make any money at this?"  is the constant refrain of indie filmmakers, including myself.  Increasingly, I am finding the answer is:  YOU DON'T.   At least, not from the movie itself.
This is no surprise.  I watched the same thing happen in the music industry, where opportunities to thrive still exist, but are largely limited to touring revenues, for true independent musicians, and up-front signing bonuses for "ready-made" acts, like the Amercian Idol gang.
Similarly, with indie films- er, videos; do indies shoot on film anymore? Ever?-   most New Media Moguls are making their short movies, features, mash-ups, and music videos, just because they can, and they love it.  They use these works as calling cards, like PinktheSeries.com.  The payoff, if there is one,  comes on the back end.
The latest such YouTube sensation appears (I haven't fact-checked it) to be a true story about two men and a resuced lion cub.  I'm not sure there is enough meat here for a 90-minute movie; the 90-second YouTube video pretty well gets to the essence.  But the rumor is that Sony Films sat up and took notice when the video hit 14 million views.
Deciding what does and does not get made into a film simply by using the YouTube metric may seem crass and unartistic.  But I kind of like the idea.  It is what bands do when they tour the dive bar circuit and self-release home recordings on home-burned CDs.  In other words, these movies are building a fan base.  When they hit critical mass, the majors sit up and take notice.  Occassionally, the big studios may snatch them up just before the story suffers YouTube burnout.  But at least the public has already voted with their eyeballs.
That way, studio execs can focus on more pressing matters, like whether to stock Bling or Cloud Juice at the daily staff meetings.
Posted by Curtis Wayne at 7:46 AM