Is that thing loaded? 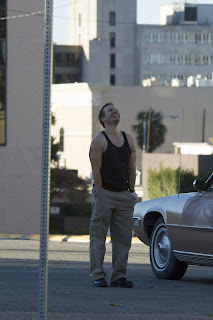 Chris Anderson, author of The Long Tail, and editor of Wired Magazine, wrote a terrific article on how shooting digitally affects the performance of actors.

Big-name directors that Anderson spoke with, such as Tony Bill (Flyboys, Untamed Heart) explained that shooting digitally eliminates the actors' fear that every take was costing hundreds or thousands of dollars of film, and thus put the actor more at ease.

Photo by Larry Furnace
It also allowed directors to eliminate rehearsals and roll on every take:

Having shot on both multi-camera 35mm sets and indie digital sets of various sizes, I have to disagree just a bit. It is true that film is expensive. For an indie filmmaker with a nano-budget, shooting even 16mm is often prohibitive. Robert Rodriguez' book Rebel without a Crew explains this well.

However, there are usually other factors at work that are even more prohibitive than the cost of film, such as crew costs, limited location availability, daylight, and the number of takes an actor (or director) has in them. Actors are like racehorses who wait, wait, wait, in their stalls, while the crew dresses a set, makes up the actors, rigs the lighting, sets the props, and grabs focus. By the time the director yells "Action!", the actors are often emotionally spent. It's like war: hours of boredom punctuated by minutes of sheer terror.

In the still shot above, for example, I am freezing my nips off on a 40' F morning, with a 30' wind chill, while pretending that it is 90' outside. [Photo by professional set photog, industrial videographer, and all-around mechanical genius Larry Furnace.]  But when director Kat Candler called action, we all had to be ready to go, knowing that we had limited time and resources for getting this shoot wrapped.

Even in my former life as a musician, digital media did not change the economics of hourly studio rental and producer fees.  When we rolled, uh, RAM... it was much the same as rolling expensive 2" tape:  time is money.  Time is always money.  Maybe not yours, but somebody's.  And if you are a professional, you appreciate other people's time, and do not waste it.

Digital definitely allows long tail movie-making. But it does not preclude common sense and pre-planning in the process.