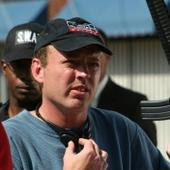 My recent interview is now up. You can download it directly, or subscribe in iTunes. Both are free to you.
From the show notes:

Jon Keeyes left Hollywood so that he could become a filmmaker. His "American Nightmare" is a fixture in the cult horror scene, and in "Living and Dying" (released by HBO), he directed top actors like Edward Furlong, Michael Madsen, Jordana Spiro, Arnold Vosloo, Trent Haaga, and yours truly. Now a staple of independent Texas productions, ranging from $50,000 to $1.2 million, and most recently a new media venture for Warner Brothers, Jon's is a true Cinderella story.