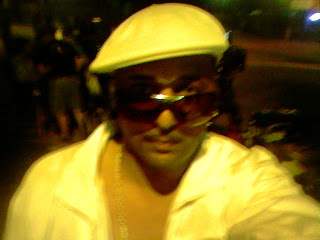 Brother Dave rocked the house as Roy DeLaCroix in the movie Streets of Blood, with Sharon Stone, Val Kilmer, and 50 Cent. His girl Jenn sent the following e-mail update:

Well, Dave and I are in Louisianna this week while he films for the movie "Streets of Blood" w/ Sharon Stone, Val Kilmer and 50 Cent. They picked him up last night from the hotel at 8:00 pm and dropped him back off this morning at 6:00 am. He had a lot of fun....they put him in make up and costume (see photo below) to the play the role of Ray DelaCroix, who to me looks more like Ali G! :-) Costume included sweatsuit, big diamond earing studs, tatoo of dice on his neck, hat, sunglasses, and sprayed on freckels! They pimped him out then had him in a pimped out Green (yes bright green) Caprice Classic. He got to perform his own stunts - which he was very excited about - which included racing down an alley in the car, spinning out, jumping the curb and hitting a set of trash cans. They told him he did such a good job at it they suspected he must drive like that all the time! Anyway he came home (well to our hotel) very excited, not to mention the fact that they used powdered B12 for him to snort to look like he was snorting Cocaine - so he came back w/ plenty of energy after such a long night of shooting and lots of great stories. I just wanted to share this update with each of you as I know this is an exciting experience for Dave and I, but it is nice to share with all of you as you all have been great in supporting us with your enthusiasm for Dave's career and well, now you can say you know a Movie Star (regardless of how much it embarrasses Dave!)

Good on ya, Davi. Represent.