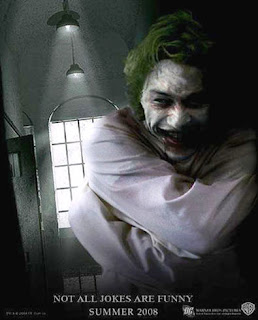 Saw "The Dark Knight" today. It was waaaaay cool... for the first 2 hours. I'd say the movie was 3 great acts, and 2 short, superfluous ones.

Now, Heath Ledger was excellent. Maggie Gyllenhall was really as interesting as she could be with the "damsel in distress but not really" role- much better than her predecessors in this series. Christian Bale was kind of annoying, but not enough to ruin anything. I got tired of the forced-whisper-through-gritted-teeth-thing. Gary Oldman was typically great, if understated. Did I mention that Heath Ledger was excellent?

The only thing missing was a truly hot, half-naked woman. IMHO. Where, I ask, was the gratuitous nudity?!

The actors' voices were low and buried in the sound mix, but that seems common these days, even on the most big-budget movies. And the editing was so fast-paced (particularly in the last two mini-acts) that it was hard to follow all the details.

The Nolan Brothers have done some good work, and this was right up there with the "Memento". It just went on too long. The "x-ray phone" thing was a bit too much of a stretch.

OK, so the "Twoface" origin story and makeup was INCREDIBLE, but that little mini-story could have been a whole other movie, and should have been, in my opinion. But they didn't ask me.

Did I mention that Heath Ledger was excellent?
Posted by Curtis Wayne at 8:50 PM