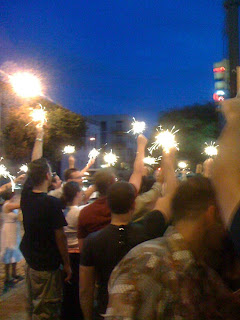 In a post last week, I discussed the cloudy future of big-budget Hollywood movies. As movies move inevitably towards free, how will filmmakers, and cinemas, make money? Austin's Alamo Drafthouse has one answer: The Team America Sing-Along.

The feature film showing was more than your usual cinema fare. It was a combination movie and comedy club, and drunken frat party. Well, not quite that radical (it was the 7 p.m. showing, after all), but it was value-added interactive entertainment. It was... an event.

My wife Mary and our friends Robert and Sherri Dugan 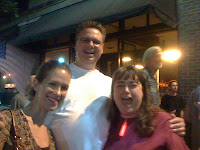 were handed a goodie-bag of American flags, glow sticks, balloons, poppers, and sparklers. After the customized patrio-parody opening trailer collage, a live host laid down the ground rules for the film, which included speaking and singing along to the "Fuck yeah!" choruses, standing and cheering, tossing streamers and balloons, and then following the host down 6th Street after the show, waving our sparklers and singing the Team America theme song acapella, as a group, er, mob. 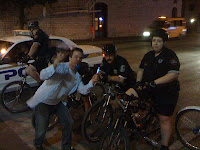 Did I mention that the Drafthouse serves food and alchohol?

If I wanted to just watch a movie, I can do that quite well in the comfort of my own home, thank you very much. Big screen, hi-def home theater has never been so affordable, and movies were never so cheap and easy to get.

No, what I want is an experience, a reason to get off the couch and go sit in a room with a bunch of like-minded instant friends and have a trascendent experience. In short, I want an event.

And this July 4th weekend at the Alamo's Team America Sing-along, that's what I got.

P.S. - Thanks to Beth Burroughs for learnin' me 'bout this here event.
Posted by Curtis Wayne at 6:28 AM