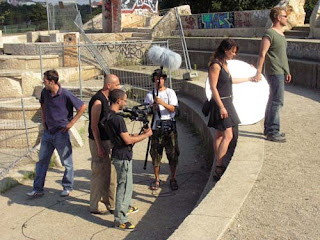 About 10 years ago, I did my first 35mm film project for German director David Jazay, who was attending the UK's Northern School for Film and Television (now renamed). The film screened at the prestigious Leeds Film Festival, David graduated, and I went on to pursue a life in music. Several folks who worked on the movie have gone on to do some pretty cool things, including cinematographer Gay Hian Teoh, and composer Jaro Messerschmidt.

I later tried to track down David, without success, although I saw from IMDB and other places that he was still directing film and television. So I posted a comment on one of his movie pages on IMDB two years ago.

Out of the blue, David hit me back this weekend! He's alive and kicking, living in Berlin, and has been making cool films with guys like Shai Levy. He also makes music. One day, maybe David and I will be on the same continent again, and we'll make some movies.

Keep up the good fight, David!