5 movie remakes that must be stopped

My God, I had no idea! This cannot stand!!!
Posted by Curtis Wayne at 5:54 PM No comments:

A shameless plug for my fellow Texas filmmaker Russ Pond.

Indigenous Film Works and Top Pup Media invite you and your guests to a free preview screening of FISSURE in Dallas on July 21st, Houston on July 22nd and Austin on July 23rd. Showtime is 7:30 PM. Doors open at 6:30pm. The screening is free, so seating is first come, first serve.

Fissure star James Macdonald and producer/director Russ Pond will be attending all three screenings. Please join us for a night of mystery and indie filmmaking.

Details about the screenings can be found here: http://fissure.tv/screenings

You can register for the Facebook events at the following links:

Synopsis: Detective Paul Grunning is trying to piece together his fractured life. When a routine disturbance at the Ulster House turns into an unexplainable death, all he has worked for will be tested. James McDonald is Grunning, an ailing, addicted cop, haunted by his own bad choices. He investigates the mysterious house, only to find shifting testimonies and perplexing new clues in every room. Sifting through the erratic claims of Emma, the victim’s wife, Rachel, the seductive grad student, and Andrew, a bitterly resentful son, Grunning uncovers motives, but no real answers. Ultimately, Grunning must navigate a fractured reality and his own insecurities to find what's real.

Fissure Trailer: http://www.fissure.tv/fissure-trailer
Posted by Curtis Wayne at 9:50 AM No comments:

Yeah, that got my attention, too.

My friend Joe McReynolds hipped me to Lance Weiler's feature film site. I had heard of Lance's Workbook Project, but hadn't put his face to the films. Weiler claims to have made $4.5 million from self-distribution of his first feature, The Last Broadcast. His Workbook Project is wildly popular, and has returned him more money than a book advance he turned down to start it.

Posted by Curtis Wayne at 8:02 AM No comments: 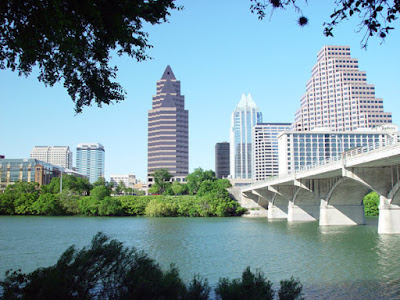 So when you're considering where to hang out your filmmaker shingle, choose your rut carefully. You'll be in it a long time.
Posted by Curtis Wayne at 8:25 AM No comments:

In a recent episode of KCRW's The Business, host and Daily Beast writer Kim Masters and two of her journalistic comrades, Jonathan Horn, staff writer for the Los Angeles Times, and Stephen Galloway executive editor of the Hollywood Reporter magazine, concurred with my prognosis that mid-level Hollywood films are dying, possibly already dead.

"Movies are more about concept than stars," said Horn. Which explains Transformers, Spider Man, The X-Men, Hangover, and, uh, Transformers 2. High-concept movies are nothing new, but they used to be a tasty desert on the Hollywood studios' menu; now they are the main course.

It looks like they will soon be the only dish that Hollywood serves.
Posted by Curtis Wayne at 10:24 PM No comments:

Shara Nickell brought my attention (via Angela Lee's Film Austin Yahoo Group) to this excellent article from L.A. entertainment attorney Gordon Firemark, and he graciously allowed me to republish it here. Good stuff. I've been working with L.A.-based producers for over 10 years raising money for films, only modestly successfully. It's complicated and expensive. Before you stake your hopes on "InstantProducer.tv" or similar sites, read this article.
-------------------------------------------------------

How not to use the internet to find investors for your film or theatre project.

In recent weeks, I’ve begun to see more and more independent filmmakers and theatre producers using forums, chat rooms, and other internet-services to seek out investors for their projects. In most cases, these inquiries are couched in plain language: “Seeking investors for independent film” or similar.

Unfortunately for these producers, their use of the internet as a tool in identifying and securing the financing for their projects may actually serve as an impediment to their efforts, making the sometimes improbable chances of raising funds virtually impossible.

Projects financed through the use of funds contributed by investors must comply with myriad laws and regulations governing the manner in which the investment opportunity is communicated and the transaction completed. First among these laws is the 1934 Securities Act, which established the Securities Exchange Commission, and gave that agency authority to regulate the offer and sale of securities.

What is a “security”?

Generally speaking, any sale of an investment in a venture where the investor’s role is “passive”, in that he or she does not share meaningfully in the right to control the day-to-day operations of the venture, and/or does not share the risk of loss with those in control, is likely to be considered a security, subject to the rules and regulations of the SEC.

The general rule is that every offering or sale of securities must be registered with the SEC unless there is an available exemption on which the issuer relies. Registration of securities is a time-consuming and often cost-prohibitive option for low-budget filmmakers and producers of theatrical plays and musicals.

Exemptions from Registration: Advertising not permitted.

Although there are several exemptions from registration available, those that are most commonly available to producers of entertainment arise under SEC Regulation D. Unfortunately, these exemptions are intended for private, limited offerings, rather than offers made to the general public. As such, the regulations prohibit the use of advertising in the offer and sale of the securities.

Lawyers are in agreement that any communication put on the internet for the purpose of raising money via sales of securities WILL be considered an advertisement, and thus, renders the Regulation D exemptions inapplicable. Therefore, by posting in an internet forum, chat room or social networking site, producers often make things much harder for themselves.

So, how can a producer effectively use the internet in her efforts to finance her project?

One possible solution is to work outside the securities realm. By this I don’t mean to skirt the law, but rather to ensure that the offering being made does not involve securities, but instead, an opportunity to become an “active” investor and participant in the production. Typically, this is done by posting or offering prospects the chance to review the business plan for the project, and the chance to join as a partner, co-venturer or founder of an initial incorporation for the purpose of producing the project.

This drastically limits the universe of likely financing partners, since by being “active”, the partner shares in the downside (liability) as well as the possible upside from the profitable project.

Another viable approach (if executed carefully), is to use the internet as a tool for developing and building relationships with people whom you may later approach on a personal, private basis with the investment opportunity. Care should be taken, however, that this relationship building is in fact more than merely window-dressing. The common interests of those involved must go beyond the project being financed. The internet in such situation isn’t involved in making the offer, but merely in networking with like-minded individuals.

Finally, there ARE some internet based organizations that focus on attracting “accredited” investors and building a pool or network of people interested in investing in entertainment projects. By engaging the services of such an organization, (which has a pre-existing relationship with pre-qualified investors), some producers have succeeded in securing financing.

Ultimately, however, the internet should be thought of as simply another medium for communication. It cannot be used in ways that older, more traditional communication methods would be prohibited. Before starting any campaign to raise funding for a film or theatre project, producers should consult with a qualified and experienced entertainment lawyer (like the author), as the pitfalls for noncompliance with securities regulations are onerous.

NOTE: This article addresses U.S. Law only. Securities laws vary from one country to the next, and from state-to-state within the U.S. This article is not a substitute for legal advice obtained from an experienced entertainment attorney you’ve hired to counsel and represent you.

Posted by Curtis Wayne at 12:03 PM No comments: